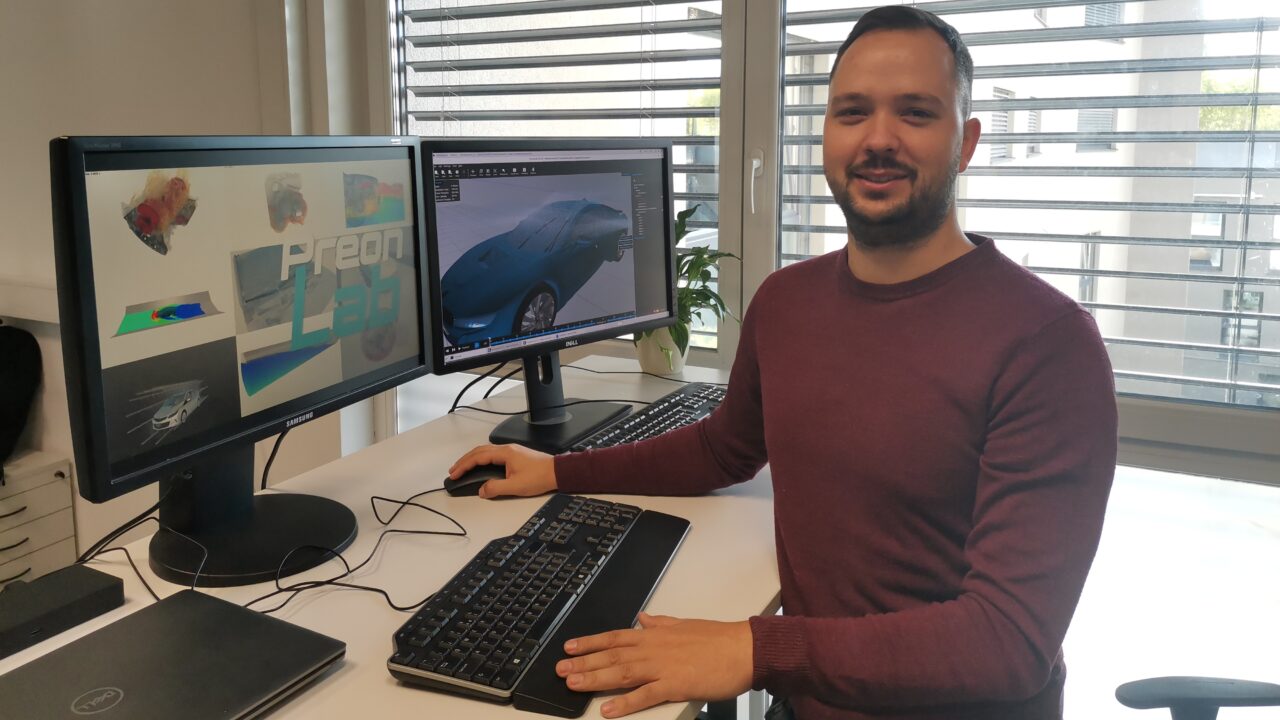 Hello Jan! This is a very special interview today. Because for the first time I am not conducting an interview with a FIFTY2 employee. You work for our partner company AVL! Can you explain what your job is there?

Sure! My official title is “Team Leader for Vehicle and Driveline Analysis”, which means that I’m responsible for a small group of engineers working exactly in that field.

In our daily work, we are using several simulation tools. Most of them are AVL in-house developed tools, but one of them is PreonLab, which is used for vehicle-related applications. In addition to that, I also have partial responsibilities as a business developer for PreonLab. However, this is only for the vehicle side of the business.

Would you agree if I said that you’re working mainly in the CFD simulations area?

In my day-to-day responsibilities, the answer to that would be yes. The majority of my effective time is dedicated to CFD.  However, the other part of the team, which is driveline analysis also takes some time so it is not only CFD. In addition to that, there are some organizational and management responsibilities which keep it always interesting!

First, though, you had a different focus. During your bachelor's degree, you focused on flying aircraft and helicopters, and in your master's degree, you specialized in environment and process engineering - when did your interest change then to CFD?

My initial career goal was to be a fighter pilot. This did not succeed in the end and I have considered pivoting to a commercial airliner pilot career. This was in 2008 which was a bad time due to the recession for the aviation industry and the world economy in general. At some point partially due to economic reasons as well as slightly changed personal interests, I changed my mind and decided to go study the Masters of Mechanical Engineering. In Slovenia curriculum in mechanical engineering is quite broad, probably broader than in other countries. During my studies, I was exposed to CFD for the first time and I kind of fell in love with it and I thought this is the field I would like to work in.

The first CFD simulation I have ever done was in Germany when I was studying there, spending a year abroad. It was a multiphase simulation – mixing of coffee and milk.

It was a rather simple simulation, but at that time it felt interesting and challenging. And I guess it was somewhere around that time when I thought, okay, this is something I like and I want to pursue a career down this way.

When was then the first time you got to know and use PreonLab?

This must have been around 2018 when I got in contact with you guys at FIFTY2 for the first time. I believe it was PreonLab version 3.3. I think it was Markus whom I met first from FIFTY2 and we discussed PreonLab briefly. At the time, PreonLab was not that well known even within AVL. I was one of the first users here in Slovenia who started to actively work with it. Initially just occasionally, but soon after it took over the majority of my time allocation and it has been like that for probably a couple of years now.

Today, how do you use PreonLab on a day-to-day basis when working?

Today, I would say my role has slightly changed already. I don’t do as much hands-on work as I used to. The reason for that is that I took over new responsibilities as a team leader. These days engineering wise I am mostly focused on execution of customer projects, customer support and development of new applications and solutions. This is also very rewarding since it is challenging and there is always something new to figure out. The other side of PreonLab day-to-day activities are mentoring and consultancy to other engineers using the tool on a daily basis.

In the past, you have held some webinars which were about PreonLab. What is the general feedback you get on PreonLab from potential customers that are yet to work with it themselves?

Maybe we can group the feedback in two groups.

I would say some potential clients are familiar with SPH but are maybe slightly hesitant and sceptical in a way. This is not uncommon, I would say.

And usually, by the end of the presentation, the feedback we get is something like: “Well, some of the things we saw have surprised us!” For example, they see a technology breakthrough that they were not aware of, or they see these photorealistic videos and animations of various applications we can do.

And this is really, I would say, quite common that they comment on it in a very positive way.

But where does this initial scepticism come from?

My personal experience is that it often actually comes from other tools that people haven’t had a good experience with.

So I think this is the obstacle that we are addressing very well.

I believe that with PreonLab, a lot of effort that is historically very time-consuming, especially in the pre-processing stage, is eliminated.

And at first, it seems like a promise that is too good to be true, but eventually, it turns out that this is the case.

With PreonLab we are challenging the status quo that there are ways to do things better and more efficiently and that engineers actually can have fun when working with it.

Then there’s the other group who is not familiar with SPH method. Usually, these meetings start with a general overview and potentially with a follow-up hands-on demonstration showcase. In such cases, I tend to focus very much on the usability side of things because, in my opinion, this is something that is often overlooked, but it’s extremely important for any user who is just starting with a new tool.

PreonLab is very easy to learn and it has a steep learning curve. Usually what we find is that again, people are a bit sceptical if one can learn it that fast. It then normally takes a showcase which we do maybe in 1 hour or so where we work on the model itself, the actual simulation they are interested in, and in the end, it proves the point that in just a couple of hours one can do a lot of work with it.

But regardless of initial feedback, very often soon after the initial meeting potential further steps in terms of the demo, license, project work, or showcase are discussed. This is also something that I think is a kind of an ultimate testimonial that in the end, the tool is very attractive and people want to test it themselves.

And finally, now that we know that you have been working with PreonLab for around four years now, you’ve obviously seen the developments that have been taking place since then. Keeping that in mind, how do you see PreonLab develop in the next, let’s say four years?

To answer this question, I think it’s worth looking at the past four years and maybe drawing some common patterns from that. I would say that in my opinion, the development team has done a very good job of making decisions in terms of what to implement in PreonLab and when. It’s not just a question of what, but also in what order, right?

So, I would say that we’ve done a good job in the past and I think we’ll continue to work in this direction also in the future.

Now, in the last, let’s say two to three years, some of the key technological improvements have been implemented in PreonLab such as particle refinement and then continuous refinement and multi-phase. And these are all, I would say, door openers to new applications.

So in the beginning, PreonLab was super powerful for vehicle water wading and this still is one of the flagship applications.

But then as more physics was added, more models became available, and the portfolio of applications got broader. I think we will see this also in the future.

We have to be smart in terms of selecting and focusing on certain new features and those will then again, I believe, open the doors to new applications within the automotive industry. For sure, we have some applications that need some more work, but I see it as a consequence, not as a possibility actually, that eventually PreonLab will overgrow the automotive industry and will be used in other industries as well, as it is already happening with the white goods industry.

So in short, I see us growing quite a lot. I see that in the future we will continue to expand our application portfolio to make PreonLab accessible to even more people!