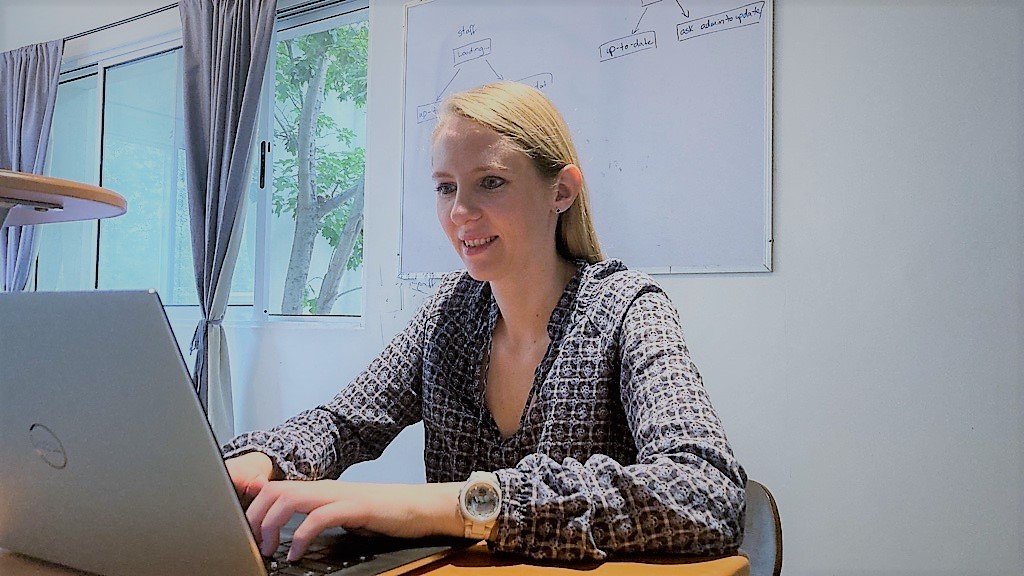 Let's start with your career so far, which is quite special. You live in Mexico, what was your journey from Germany to North America?

I graduated from high school in Germany, then did my bachelor’s and master’s degrees in physics at the ETH in Zurich, and later my doctorate at the ETH and the Paul Scherrer Institute in Switzerland.

In my doctorate, I did experimental physics and had to write many programs for data analysis. This was when I realized how much I enjoy programming, which became a great passion for me from that point on.

After that, I first had a job in Bavaria as a development engineer planning a lab. Around the same time, I also met my husband, who is Mexican. Together we then decided to go to Mexico, which I found very exciting because it was a completely new culture and experience for me. It was also a great opportunity to learn a new language.

In Mexico, I then worked at a research institute and did some work independently on online projects, such as building websites and doing web analytics. I also started creating web applications and thereby learned and got to know Python, Django and other tools. This brought me closer to my goal of programming something that people could see and use directly.

How did it eventually come about that you became aware of FIFTY2 from Mexico? How did the contact get started?

At one point, I decided that I would like to go to a company in Germany, and I had the hope to do it remotely. I then searched on the internet for possible job offers. FIFTY2 popped up as the winner to best fit all my very specific search criteria that I had. The job was perfect as it focuses on app development with physics at its core, thus combining all my passions in this context.

I then sent off my application and got in touch with the team at FIFTY2 and the positive conversations led me to join the company in April 2021.

What are your tasks at FIFTY2?

I work as a full stack developer. We are building a revolutionary workflow and management application for PreonLab. Like everyone in my team, I work on the front- and backend of the application using a variety of technologies but mainly Angular and the Django REST framework.
The frontend is basically what the user will see and interact with on their screen, while the backend is the motor for the app and very importantly also the place where all the data mostly from the simulations is handled.

For every piece of code that we write we also need to write tests. This is also a big part of my work.

We also have a designer helping us with the look of the app. A big part of the frontend work is to implement the layout proposed by the designer.

In the future I will also be involved in building and maintaining the infrastructure of the application which means for example the database configuration, server setup and management of software package versions among others.

In general, with all the experience that you have already made, how would you say is working at FIFTY2 different from previous roles?

A lot is new to me. One of the things for example is working with tickets. In many fields and jobs, it happens that you are faced with a huge task, where you often don’t really know where to start. You often get the feeling that you never really get anything done. With the tickets, however, all individual work steps are small and precisely documented, which makes the way to the solution significantly more efficient.

Also, because individual tasks are assigned to people, everyone in the team knows exactly who is working on what, and that makes it easier to communicate. Being able to finish each task rather quickly motivates people.

Of course, Mexico is not exactly a stone's throw away from the Black Forest. Is it still possible for you to manage to work effectively with your team despite the distance and the associated time difference?

Yes, that’s right, I’m 7 hours behind you folks in Germany.

But that’s not a big problem for me, since I usually start working at 3 a.m. my time, and usually finish around 12 noon. This means that in German time I work from 10 a.m. to 7 p.m., so to speak.

For many, this probably wouldn’t be the ideal work schedule, but I got used to it very quickly. This is now my first real job as a programmer, which has been my goal for a very long time and that motivates me every single morning! In addition, there are many advantages to living in that rhythm. Most of all it gives me the entire afternoon to spend with my family and friends!

So, to answer your question, the distance and the time difference is actually not that much of a problem, really.

Is there any other hobby or something similar that you are passionate about?

I would say languages. I love learning new languages and being able to talk to people in their native language.

At school I started with English and Latin, which I had until I graduated from high school. Outside of class time, I would also learn French. Later, during my doctoral studies, I learned Russian for 2 years, which was quite challenging also because of the Cyrillic alphabet, but still, or maybe even because of that very reason, a lot of fun. And then finally I learned Spanish, which of course I now need for my everyday life.
I also find sports to be very important for your health as well as for a good balance for your usual routine. I regularly go to boxing class, which is a great way to train your entire body and focus your mind.

How to get started with
Preonlab CFD software?
Get in Touch
Cookie settings