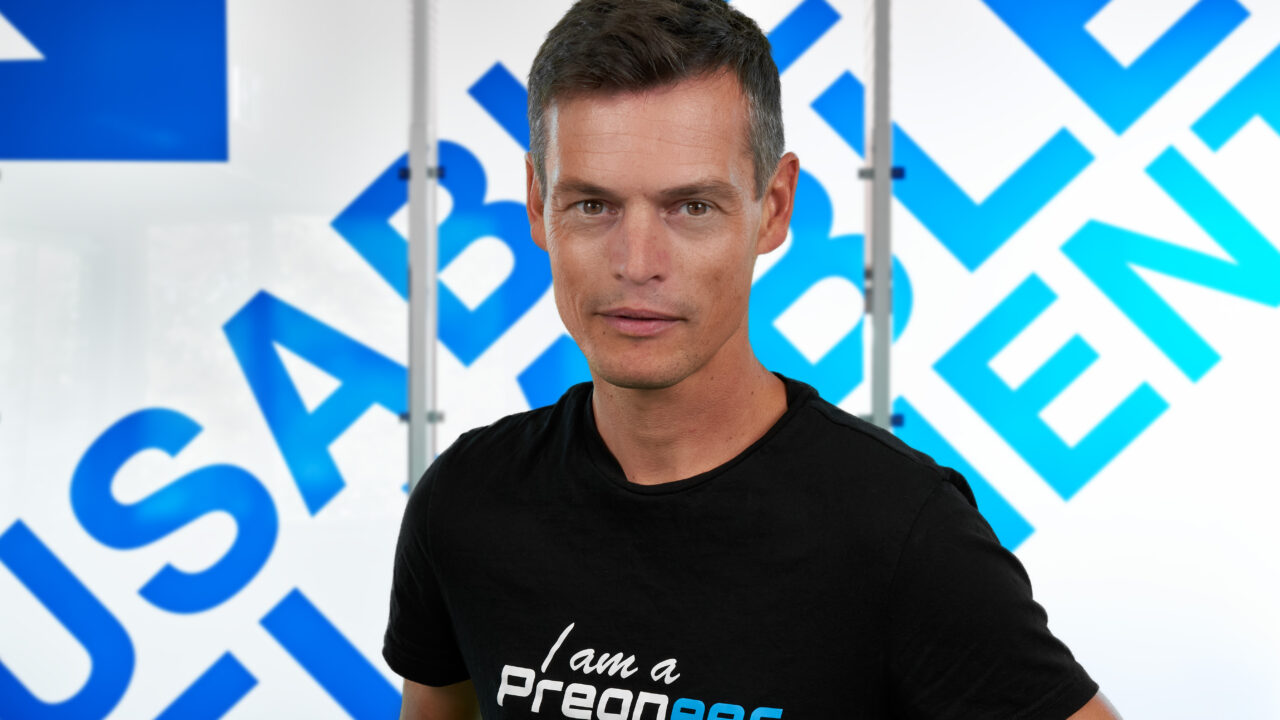 Firstly, I'd like to talk to you about the path from the idea to the founding of the company. Some watch soccer and want to be soccer players, others grow up dreaming of becoming astronauts. Where did the passion for simulations come from?

Actually, I wanted to be a soccer player, too. When I realized that a professional career might not work out, I decided to study computer science with a focus on artificial intelligence (AI). During my studies I have joined the RoboCup team of Freiburg in 2005, where they made humanoid robots, programmed to play soccer against each other. Thus, my passion for soccer was still covered. In this team, I met Marc Gissler, who I call a friend since then and who, 12 years later, became one of the early employees at FIFTY2. Back then, I have worked on the AI software for the robot. Marc wrote a very cool visualization tool which allowed us to test the AI without any hardware robot. We worked pretty hard on this … was a lot of fun.  That’s where I got hooked to the simulation world. I decided to trade in my AI career and pivoted into simulation and computer graphics. I remember sitting in Professor Teschner’s office, who was hesitant to give me a student project without me having visited his lectures. In particular, the topic of fluid simulation, he classified as too difficult for a newbie. But since I have started wave surfing at this time my fascination for water was huge, and I ended up choosing exactly this topic. Being able to simulate the beauty of fluids with the computer sounded like the most exciting thing.

During your doctorate you also met Jens (Cornelis), who was working on his master's thesis at the time. Both of you quickly realized that you shared the same fascination for water simulation. When did the moment come for you to decide to start a company based on the idea of fluid simulation?

From the outside, Jens and me might appear like an odd couple, but we have a quite big common denominator. We started to share the same office when I was already about to finish my Phd thesis. In this process, we had a lot of chats about the fundamental limitations of Smoothed Particle Hydrodynamics (SPH). Around these conversations, ideas were generated, which finally ended up in a new formulation which resolved these limitations and allowed us to simulate fluids at higher resolution in much shorter time. Most of all, this new solver was stable as hell compared to the standard solver we have used before. This was a very intense time, working long hours with a lot of trial and errors, getting stuck on many brilliant ideas that just did not work out. But we always stayed positive and motivated each other and finally made it.

Although, the resulting paper and the implicit solver are at the core of what is now PreonLab, it was more the “how” which finally led to founding a company together: how we worked together, how we treated and challenged each other and how we believe(d) what software should look like. For these reasons, I was ready to start a company together with Jens.

Luckily, exactly around this time, we got a call from Christian Kussmann. Back then, his company, qPunkt (then a subsidiary of our current sales partner AVL), had been looking for a simulation method which could realize the virtualization of water management. The results in our paper looked promising to them and that’s how they came across us. We did a proof-of-method raining simulation for them and sent over the first videos which blew them away. They have not expected such high resolution results within such a short time frame. Some days later they showed up in our office after a 14-hour car ride from Graz to Freiburg. We gave them a demo version and they made the first projects for big german OEMs. This is how we have found our first market.

Then in 2015, the company was founded. What was the biggest challenge during the early days of FIFTY2?

Resources were so limited in the beginning. We have received an EXIST funding and some revenue coming from projects. We believed that this was enough money to focus on getting PreonLab ready for the market. We have consciously decided against the path with investor money and growing the team fast, because we have feared that this would make us less efficient.

In retrospect, you might say that this was a bit risky, but it was certainly the right decision which forced us to focus on what mattered most: developing the actual product to solve an actual problem. We may have been a small team in terms of sheer numbers at the beginning, but the quality of skills, motivation and character of the individuals was key for us to persevere and finally penetrate the market on the larger scale.

Let's look at the present time. We are currently facing a global pandemic. What was the biggest challenge for FIFTY2 to deal with that?

I would mention two things. First, the pandemic hit us in a phase of significant employee and revenue growth. At a size of around 30 employees, you obviously can’t work the way you would work if you had 8 employees, for example. With more employees and customers, communication channels are growing quadratically. So in order to stay efficient, changes were needed. At FIFTY2, the best idea should always win and people’s opinion are asked for and taken seriously. The task was to maintain this culture, but still cut down meeting times and communication overload as much as possible.

Secondly, and in parallel, we were forced to transition to a remote work company, which was a change for us in the beginning. We already had employees who partly worked from home, but of course we didn’t have any experience on this new scale.
For me personally, this was quite a big challenge, as I feel myself highly responsible for the well being of every Preoneer at FIFTY2 and enjoyed the vibe and face-to-face chats and discussions in our nice office. On the other hand, remote work opened up new opportunities, making us even more efficient and open to new talents.

Today, we have 2 employees who work outside of Germany, one even outside of Europe. This would probably not have been possible without this change, and it has increased the flexibility of the company.

You're talking about the team there. It has almost doubled in the last two years. What makes up the FIFTY2 team in 2021?

That’s difficult to answer as we are quite diverse. We’re looking for a common denominator shared by all FIFTY2 employees, whatever their field. In a job interview, we want to get to know the person first, and see what drives them and try to judge if they fit into our Preoneer culture. Of course, there should be an overlap in the values that we share and in what we believe is cool such as the products we make. On top of that, everyone brings different talents to the table which they are invited to thrive and even teach in the company. It is important to us that everyone has the freedom to live out their creativity and own ideas in order to improve themselves and the company a little bit every day. I believe that’s exactly the case and it’s what makes working with everyone on the team so fun.

Think back to the Markus from five years ago - what would he say if he knew where FIFTY2 is today in 2021?

I definitely would have said, “Wow, I’ll take that.”  On the one hand, I probably wouldn’t have expected it like that, but on the other hand, I knew that if we would live up to our own standards and have a bit of luck that we have quite a chance to change the simulation industry and replace outdated, complicated technology.

Finally, I would like to give you the opportunity to leave a message for Markus to read in 2026. How do you think PreonLab and FIFTY2 will develop until then?

I think in five years two things will happen: Firstly, we will smile about the performance of the simulations, which we find insanely great today. I mean, today it is already like that: when I think back to the early days, when we simulated with 200,000 particles, we thought that’s huge. Today, our customers sometimes simulate over a billion particles at the same time. This trend will continue and the differences will probably be even more glaring. Secondly, we’ll look back and we’ll think “Wow, how complicated the workflows were back then!”. I imagine people using PreonLab who have nothing to do with simulations in general today. In five years from now, people will say that FIFTY2 has been the main driver in changing that.